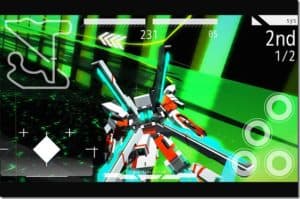 Break Arts Cyber ​​Battle Racing is a combat racing game featuring fully customisable mecha. You jump into a giant robot and hurtle it through outer space. You are not free to fly wherever you please, though. There are tracks to stick to, so you’ll want to get a decent command on the on-screen joystick in order to reach maximum speed.

Not only that, you’ll need to master boost control and firing missiles to clear the track of your robotic enemies. The Japanese developer refers to it as the “art of destruction.

Find the art in destruction as you go up against others in a world of racing and combat. Fully customize your mecha to match your preferences. Then set out to the track to race and combat against other mechas. Use the on-screen joy stick to control your racing robot to maneuver around the track, and your buttons to boost, fire missiles and shoot at your opponents

In addition,  we will have the chance to place a variety of weapons such as rocket launchers, minigun and even melee weapons, to get us off between opponents in the many paths psychedelic that characterize it.

– A large range of race maps
– A fully customizable mecha
– Race against other players
– Solo and coop missions
– Daily rewards
– A shop packed full of parts to customize your mecha (and a black market too!)
– Combat arena levels also available

Break Arts Cyber ​​Battle Racing will be available both on Android than on iOS , as confirmed also by the same software house and the trailer released, the download will be free and supported by optional in-app purchases.