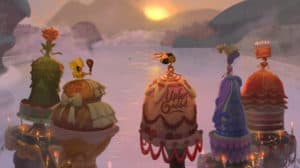 Broken Age comes from a Kickstarter success, which breaks with an idea to restore the genre, managed by one of his ancestors originate, that in fact  by the name of Tim Schafer . Think ‘: a project as low-budget collecting an incredible success well before they are revealed the details, just because there is a big name behind that in the 80 -90 gave the best of themselves. It is the nostalgia, there is no other explanation.

Controversy aside, the production of Double Fine is truly an adventure game. Broken Age brings in fact on almost all platforms currently active experience of point and click adventure flavor classic , where the characters and puzzles are the main drivers of the entire scaffold. 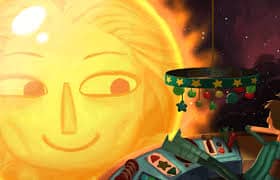 There are two related stories in Broken Age, with characters, settings and tones which are totally different, parallel playable at will. Vella is a girl in one piece that was chosen as a sacrifice to the monster Mog Chothra . Everything is seen as a ceremony by the local people, and young people are brought up with the idea of sacrifice as a goal, the only way to keep the peace. Even the parents of the “victims” are  ready to do anything to give their child in meal Mog Chothra. However, Vella this situation does not go down, and his story will focus on how to kill the vile monster.

Besides, Shay is a guy who lives locked up in a spaceship. Every day, his mother, a computer programmed to protect him, sends him on missions fake in order to keep it at bay, until he neither can most of this paradoxical situation. Both stories deal with mature themes and human , by the rebellion indoctrination, without ever falling into too much seriousness, always being veiled by the sharp sense of humor typical of the productions of Schafer, who for sure will manage to snatch more than a smile.

Although the value was well set up, you get the impression of how many things were left to chance, so as to emerge in the player of the questions that will never have an answer along the course of the game. It perhaps a bit ‘too essential but adorable, while the second act seems more tired than the last, less successful, as to portend already by half the wasted opportunity. 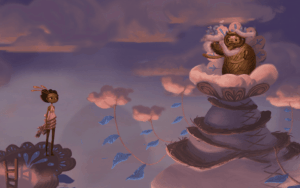 Exception is made ​​for the technical side are, apart from a few small slip because of zooms spectacular showing some details of the environment in low definition, the rest of the audiovisual sector is simply outstanding . The designs are moving harmony looks very fancy, almost like a cartoon. Thanks to talented figures as Elijah Wood and Jack Black . It’s all so magical and well managed that you almost forget to star playing a video game.

Before concluding , we inform you that Broken Age, is available on the Play Store at a price of € 10.47 and the App Store to price of € 9.99 . Both versions contain both acts that complete the adventure, and the package is devoid of in-app purchases . Click Here to Purchase the Game from PlayStore .