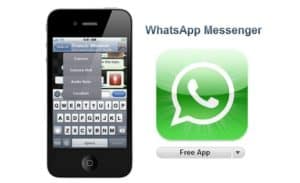 Time to say goodbye to your mobile text-plans on iPhone! WhatsApp messenger for iPhone is here and start connecting in a better way, today! The popularity of WhatsApp cannot be stressed enough. With its user base exceeding the total population of many developed countries, the power it gives to the average smartphone user is incomparable. WhatsApp has been the voice of sanity in a world where mobile service providers keep updating mobile texting plans and voice plans at will. There have been reliable research results from across the globe stating how WhatsApp was able to bring down text rates considerably.

Now that they have come out with voice plans, it is the expat community that can benefit a lot from this. WhatsApp is available across all major platforms including Androids, Windows, Blackberry and now the iOS. This is not to say that they do not have competition in the world. In fact, there are tons of competitors out there, but there are a few positive notes in its factor which allows them to keep the competition at bay. One of this is the easy sign up process.

There are no other messenger services, not even the Facebook Messenger, which can boast of an easier sign up process. All you need to do is select your country and enter your phone number and you are good to go. Compare this with the Facebook Messenger which requires your name, contact details and account details. The same applies for iPhone users as well. Signing up process is exactly the same here. However, unlike Android and Windows phones where you can change the number and device associated with the device, iPhone users do not have that liberty. We are hoping that this is one snag that WhatsApp developers will fix in the near future.

This can be a problem when you use multiple devices to stay connected with your friends. It is currently impossible for you to avail your chat history across platforms. Although you can upload your media files and history to the cloud, you can download it only to the registered device. Since WhatsApp requires you to register with a mobile and number and there is a mandatory verification process, devices with no SIM cards cannot avail this service, thereby obviating tablets from its purview.

Although WhatsApp adds your contacts by default, users can keep the pests at bay using the block user feature. At a later point in time, one can unblock them making it a very handy option.

The iOS version of WhatsApp isn’t much to look at but we can earnestly expect them to improve upon it in the near future. Just like android and windows devices, you can send individual texts or send messages to a group. The notification settings are also similar with the toast notifications keeping you in loop even when you are not connected to the app.

In the face of unrelenting competition from Facebook, Skype and the likes, WhatsApp needs to diversify and this is exactly what they have done by rolling out the iOS version.