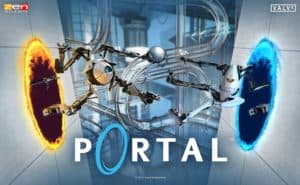 Zen Pinball  creator Zen Studios, in collaboration with Valve has announced the release of the “Aperture Science Heuristic Portal ® Pinball Device”, on mobile devices, proving that persistent experimentation is not only the hallmark of good science for the benefit of mankind, but also incalculably fun! Pinball that obviously plays much on spectacle and the various interactions that the user can experiment with three-dimensional elements that are located next to and inside the field of play.

The standalone pinball game will see players guiding Chell and Wheatley through test chambers as they battle against GLaDOS and work to escape the facility and reach the surface. More over in Portal piball, users have access to single player mode, as well as local multiplayer, in which up to four players take turns on the same device to earn the highest score possible with three balls for each. During each and every game, players tap on the left side and right sides of the screen to activate the flippers, with extra flippers located near the center and top of the board.

Here the game’s basic goal is to keep the ball in play for as long as possible, Portal Pinball offers plenty of quests and goals to complete. To start, players can activate one of six test chamber activities by sending the ball into the elevator at the top of the table. To complete these test chambers, players are asked to shoot different flashing areas of the table, causing Chell to work her way to the exit. And also  these test chambers, the board contains pivot cubes, which change gameplay by redirecting lasers around the screen, sometimes adding orange propulsion gel or blue repulsion gel to the table, which affect the ball or Chell’s movement.

Check Out the pictures and video for the occasion will explain the concept better. You will need € 1.99 (for once is on Android than on iOS) to be able to take home Portal Pinball. The in-app purchases reported are actually related to the ability to buy the many other table games branded Zen Studios .