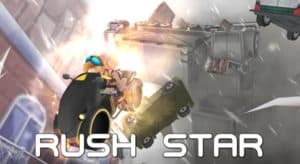 RushStar, is a  Bike Racing Adventure Game. Dreaming for the thrill of extreme speed race? Rush Star is only the  answer. Meet the unconventional racing adventure game and explore areas you’ve never even imagined of racing in!

Dash through all kinds of exciting scenes  rainy jungles, railroads in the midst boiling-hot magma, blizzard-striken villages, you name it. Hop on the top-notch bike HOVER STAR 9 and leave your trace on the land that has never been conquered. There is no better time for it than now!

– The controls are as simple can be asked, at the touch on the screen left and right to control the direction

– After completing all the stages, challenge yourself to break the record in chase mode

– Record-breaking competition that leaves only the best speed racer
– 6 Themed adventures and cop chase mode
– Various bike collection, from classic motorcycle to futuristic hover bike
– Costumes that fits each motorbike style
– Special power item that enhances the bike’s performance
– Boost system that pushes you to extreme speed racing
– Items to unlock the various events in the game
– Mission and reward specific to each game
– Special collection items and rewards that are collectible on the stage
– Cinematic game scenes that make you feel as if in a movie
– Rush Star BGM – music sounds that intensify the feel of a movie
– Post your new record to Facebook

By concluding, just take a look at the trailer to notice that the game.Rush Star is available on the App Store and Play Store for free , but the whole is supported by in-app purchases .