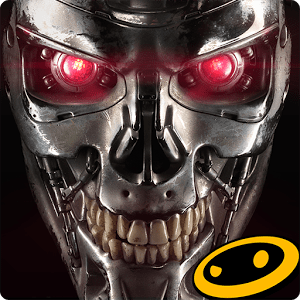 The year is 2028 and humanity is on the brink of extinction. And next John Connor in the war to save the human race, in the official game of the new film Terminator Genisys. Escape the prison camp and addresses the Skynet machines in this fast-paced sci-fi shooter!

TERMINATOR Genisys: REVOLUTION , as well as other link and signed shooter Glu , is proposed as a third-person shooter featuring hundreds of missions in post-apocalyptic environments typical of the Terminator saga. We will have a vast arsenal that will range between classic rifles, assault rifles, precision, minigun, rocket launcher and more. We will of course part of the resistance and fight alongside characters from the new film .

EXPLOSIVE IN THIRD PERSON SHOOTER
• Hundreds of quests to tackle!
• Fight in post-apocalyptic settings from stunning visuals
• Leverage your strategic skills to overcome a diverse army of deadly foes
• The immediate and intuitive controls ensure maximum ease of use

AN ARSENAL AND ADVANCED CUSTOM
• Scan a wide range of real weapons and futuristic
• Choose from shotgun, assault rifle and sniper rifle to take control of the battlefield
• Upgrade your weapons with electrical ammunition, explosives, plasma and depleted uranium
• Lance rockets, grenades and EMP against enemies

As mentioned, the game is available on Android and iOS. The download of this game is free and there are in-app purchases to unlock additional credit premium.