Warning! If you have a fear of flying, do not read another word of this article. On second thought, maybe you should. This could put some of those concerns to rest. After all, when you’re up there at around 35,000 feet above the ground, you don’t always think about everything that could go wrong. Most of us worry about the pilot’s ability or the weather or birds. How many of us think about the hardware distributors all the parts came from or the mechanics’ acumen? Fear not! There are solid reasons airline travel is counted among the safest. 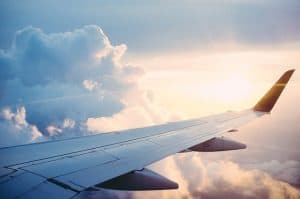 Despite all the movies about plane crashes you’ve seen or avoided, flying really is one of the safest ways to travel. Statistics show us that easily. Out of over 3.5 billion airline passengers in 2016, only 325 people died in airplane crashes. That’s a fraction of a percent of people. Not to mention this is a worldwide statistic. The reason plane crashes make national news is there just aren’t that many of them. If news outlets were to cover all the car crashes daily, they’d run out of time to report on anything else. Just because you could crash doesn’t mean you shouldn’t get into a car or a plane.

So, you have to fly but are paralyzed with fear. How do you get over it so you don’t have a panic attack mid-flight? Before anything else, recognize that your anxiety is both legitimate and not something you can just wish away. You’re going to have to deal with it. You can take those steps yourself, enlist the help of someone who’s flying with you or seek professional help. With the right tools, you can at least lessen your fear so it doesn’t prevent you from flying.

Regardless of how you tackle your worries, you’ll live a richer life going forward.