The 3D printing process creates a three-dimensional object with the use of specially-designed modeling software. The formed object is based on the concept called additive processing. Layer by layer, the material is laid down to create the 3D object. Because complex shapes are typically made with less material than traditional methods, 3D printing is utilized in many industries. Some companies use 3D models in the prototype process, and others use 3D printing for mass production. 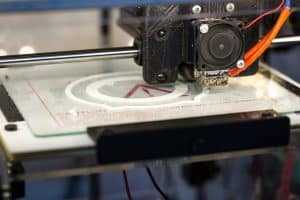 Many consumer products are made using 3D printers, including eyewear, footwear and jewelry. Eyeglass frames and even lenses can be made using this process. Because traditional lenses start with a large block of material, much of it goes to waste as the lenses are formed. The 3D printer eliminates the waste by producing the lenses to the exact specifications.

Some footwear, including many athletic shoes, are available with 3D printed midsoles.

Many dental products and prosthetics are produced using 3D technology.

Experts feel that 3D printing is the future of the construction business. Walls, floors and doors are already being produced with 3D printers. It is theoretically possible to print an entire house using the 3D method, but the process isn’t cost-effective yet.

Automotive and Other Manufacturing Companies

Many car manufacturers use 3D printers to produce spare parts, fixtures, prototypes and tools. In some instances, end-use parts are also produced. This on-demand manufacturing is appealing because it decreases stock levels and speeds up the design cycle.

Post processing services have advanced in the last several years to include 3d printing and additive manufacturing. Printed alloys use chemical milling and other surface treatments to enhance the finished parts’ quality. Improvements include better surface characteristics, mechanical properties and dimensional accuracy of the parts.

With advancements in technology, applications for the 3D printing process and additive manufacturing industry are continually growing.